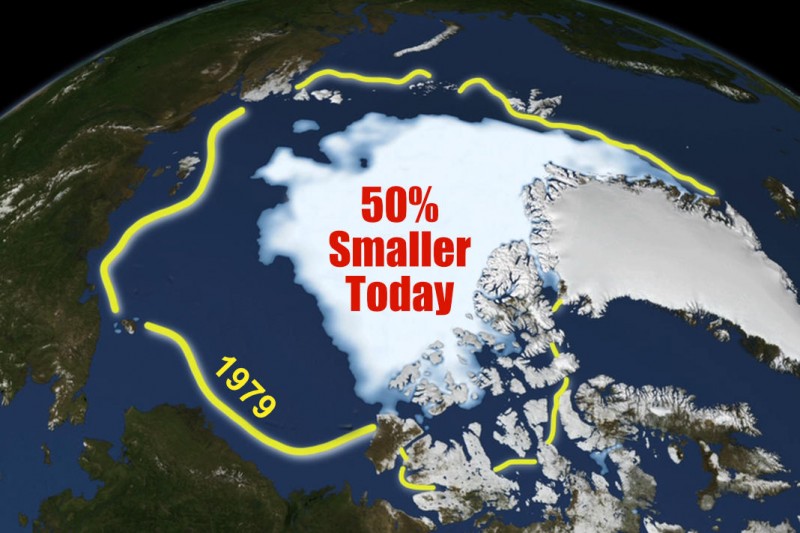 A time-lapse video released by NASA shows the drastic changes that have occurred in the Arctic polar ice cap from 1979 through 2016.

Every summer, the Arctic ice cap melts down to a "minimum" before the start of colder winter weather, when ice cover begins to increase. The video shows ice cap coverage decreasing while a chart graphically displays the downtrend in minimial ice coverage.

The rise and fall of polar ice caps

The problem is not the normal seasonal fluctuations of ice coverage. Rather, it is the reduction of deeply-formed mature ice. Mature ice is vital for new ice to form, solidify, and mature. If there is a large amount of mature ice, it keeps new ice formed during the winter from melting too quickly.

Through satellite imagery, scientists and ice monitors have been surprised to see that some of the Arctic's oldest ice is breaking up for the first time on record.

When mature ice melts, it creates a domino effect. Polar ice caps reflect the rays of the sun away from the earth. Less ice means more sun rays can penetrate through the atmosphere. This increases the water temperature and speeds up the melting process. This is what causes global warming.

Global warming is the long-term rise in the average temperature of the Earth. It is not the daily weather or climate we hear on the news.

In a photo that recently went viral, sled dogs are seen as if they were walking on water. The photo was taken by Steffen M Olsen, a climate researcher with the Danish Meteorological Institute. Olsen was on his way to retrieve oceanographic moorings and weather station on sea ice in North West Greenland when he took the photo. He said the flooding was due to rapid surface melt. And because the sea ice has low permeability, it leaves the melt water on top of the ice.

As reported by the Washington Post, Greenland recently experienced unusually high temperatures. Up to 40 degrees above normal.

According to Zachary Labe, a climate researcher at the University of California at Irvine, it is "another series of extreme events consistent with the long-term trend of a warming, changing Arctic."

Marco Tedesco, an ice researcher at Columbia University, echoes the same sentiment. He said that it also unusually warm in the east and central part of Greenland. Adding, "this has triggered widespread melting that has reached about 45 percent of the ice sheet."

Preparing for the effects of global warming

The conditions of the Arctic affects global weather. As Arctic researchers put it, "what happens in the Arctic doesn’t stay in the Arctic." Rapid Arctic warming can cause extreme weather conditions such as frequent tornadoes, heat waves, extreme drought, and flooding. Greenland's ice sheet is 1.9 miles thick, enough to cause global sea levels to rise 25 feet if it completely melted.

As scientists continue to monitor the changes in the Arctic, governments have the difficult undertaking of preparing for the potential repercussions of global warming.